Jake's Outdoors is a blog for all of your hunting, fishing and general outdoor needs. Jake's Outdoors has created this space to help beginner level enthusiasts find their way into the world of outdoors and will provide advice on how to get started. We'll cover topics like what gear you need, where to go hunting or fishing in your area, how to cook fish/game animals you've caught as well as other general outdoor tips.

Where to Find Boats for Sale: Top Websites

Where to Find Boats for Sale: Top Websites

What is the Best Kayak for Beginners

What is the Best Kayak for Beginners

Pollack is a popular fish that you can find in the Atlantic Ocean. It has white meat and is very versatile when it comes to cooking. Pollack can be boiled, fried, grilled or baked. Pollack also pairs well with numerous sauces including tartar sauce and horseradish mayonnaise. Pollack tastes best when eaten fresh so if you are going to eat pollock make sure it's cooked right away!

For most pollack fishing conducted on the boat you only need a light boat rod. The Penn rampage 2 is perfect for tackling pollack in shallow to mid water depth. It's a very light but strong rod designed by one of the best fishing rod manufacturers in the world.

This shakespeare 10 ft saltwater spinning rod is perfect for your pollack fishing from the shore. It casts very well and is a durable rod too. There are better purpose built spinning rods, but this is great for your bait fishing too. It's a versatile rod that allows you to do several different methods of fishing!

If you are serious about your boat fishing I do recommend getting a decent reel. Saltwater is a very corrosive substance and can make light-work of cheaper reels. The Penn mag 525 has been around for years and is renowned for being one of the best multiplier reels to be manufactured. If you don't want to spend £150 on a reel then the Penn warfare would be a good second option!

The Penn Spinfisher reel is one of the first reels to be sealed from the saltwater at this price. I would highly recommend purchasing this reel as its well worth the money. The shimano Nexave would be a good alternative option. I would suggest buying these reel in their 4000's size versions.

I suggest buying a high quality monofilament line if you are new to fishing. knots are easier and it's generally easier to use. Daiwa is among the best at making mono-filament line, I suggest purchasing 20 lb breaking strain line (around there). Braid is now very popular for many reasons, it casts better, has less drag and increases bite sensitivity. Spiderwire braid is a good option.

Braid will allow you to cast further from the shore. However, it takes more time to learn how to use braid. I recommend buying mono-filament for beginners and then move on to braid when you are more comfortable.

A pollacks diet includes a large portion of sand-eel. Try and match your lures to sand-eel and you will have a great chance of catching pollack. the sidewinder skerries sand-eel is renowned for being a great lure to catch pollack on. Pollack are known to like bright colours. The sidewinder king can provide this while still resembling the shape of a sand-eel. Also, both of these lures will catch bass.

I would recommend not going anywhere when pollack fishing without the skerries sand-eel. It will work well from the shore too. The metal dexter wedges below are another good option for catching pollack. They are also great at increasing your casting distance dramatically!

From the boat I would recommend using feathers for targeting pollack. Pollack are normally ferocious feeders and will take just about anything. Try using slightly bigger feathers than your usual mackerel feathers to pick out the bigger fish.

A great rig to target pollack from the shore would be a float rig. A float rig keeps the bait above the kelp where the pollack are cruising. A float rig allows you to fish a variety of different baits (live or dead). You can search out the water column effectively and remain free from most snags. A bottom fished rig will snag up quickly in a pollacks kelp/rocky habitat.

Pollack will take most baits presented to them. However, if you are out at sea and targeting pollack in deeper water the fish baits tend to work best. Strips of mackerel, herring, scad and squid will all work well fished on a paternoster rig. All these baits can be readily caught when you are out at sea. Alternatively you could order them online off "hookers baits". Nothing however will beat a live bait for pollack fished under a float. Try a sandeel, launce or joey mackerel.

WALES - The pollack is thriving in all areas of wales. It prefers rocky or rough ground or sea bed covered in kelp. Some will solely live in kelp and have a richer colour as a result.

SCOTLAND - Again they can be found in most waters off the Scottish coast. Normally caught off the west coast in numbers you can catch them throughout the year. Although they prefer the deeper water in water like most fish do.

IRELAND - Some of the best fishing in the UK can be found off the Irish coast. There's a lot less people fishing for them over in Ireland which means greater numbers yet.

The eggs are pelagic and will remain between depths of 50 metres to 90 metres! Juvenile pollack will be found in very shallow depths. They will remain in shallow water until they are several inches long. They use the seaweed in the shallow depths to hide from predators.

After surviving the childhood stage, pollack will begin to shoal and move out to deeper waters. Although they will still be present in shallower waters too. Typically your larger specimens are found on wrecks in deeper water.

Adults can be found in depths of water ranging between 2 m and 300 m plus. However, most of your pollack are found between depths of 10 and 50 m. This is because, food and suitable habitats are more abundant in these depths.

Most Pollack do migrate from North to South during the winter to conduct their breeding cycle. Mating occurs during September and April although it Peaks at the height of winter around December time.  Very little is known about the Pollack breeding cycle as is the same with many fish. However, it is known that they only breed once a year and can produce upwards of 200'000 eggs per pollack!

The Pollack is a white fleshed fish. It has a similar flesh to cod, haddock, ling and hake. It's estimated the total capture of pollack per year is 3.2 million tonnes which is massive. Pollack is probably the most consumed fish in the UK, this is the fish you will find in a fish and chip shop unless otherwise stated. However, it is looked at as a less glamorous fish when compared to cod and hake. But, cod, haddock and hake have been over-fished in recent years and pollack is becoming an even more common alternative! Therefore, lets take a look at some tasty recipes:

Pollack fishing is be great fun so why don't you get out and do some yourself. Take a look here at "The Fish Locker" out on his boat showing you how its done: 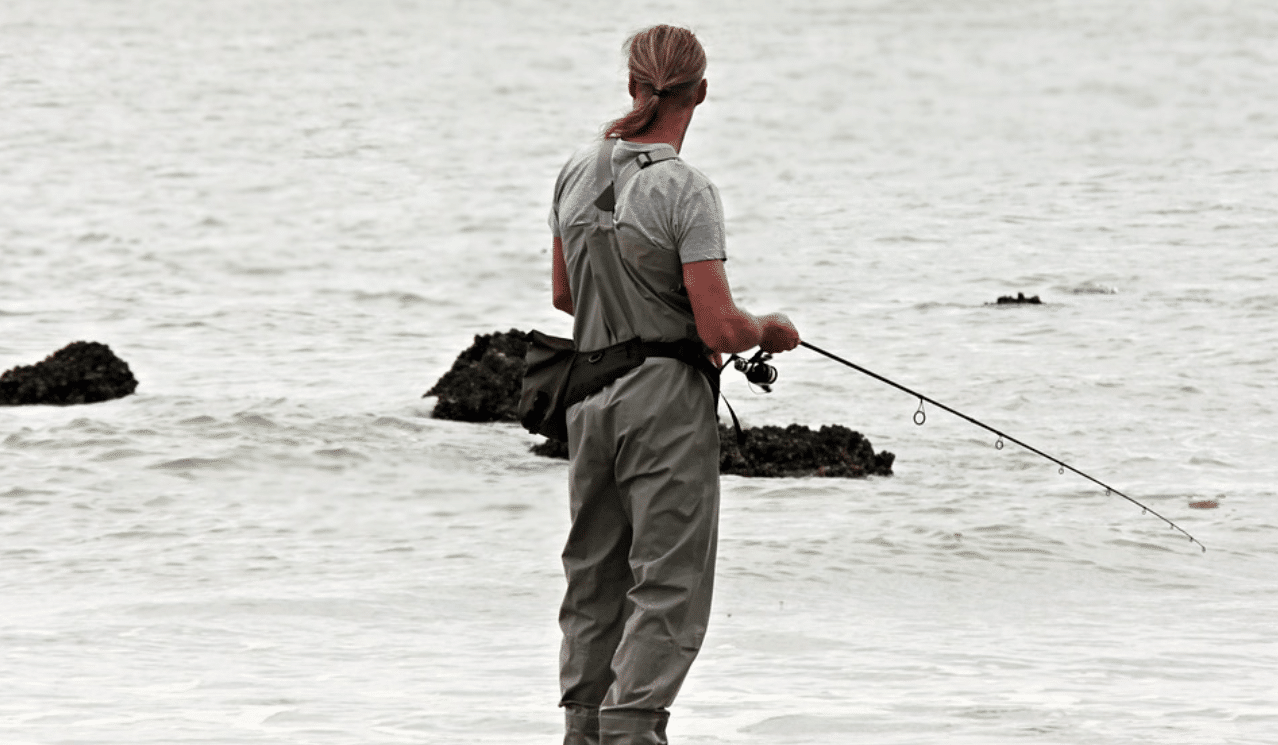 DISTRIBUTION - Pollack are found on both sides of the Atlantic ocean. They are found around cape cod, Iceland, the north sea and Norway! They tend to thrive in the Norwegian seas as do many cold water species. You will often here of large specimens coming from this area.

APPEARANCE - Pollack have a brown/bronze appearance across most of their body. The top half of the fish is normally a very dark brown colour while the bottom half is a lighter bronze and white. The colour can change dramatically depending on the environment they live in. Very dark brown pollack or redish coloured pollack would be common variants from your usual colourations.

Pollack have a distinct lateral line that is visible right down the side of the fish. The lateral line has a kink in it approximately half way down the fish. This is the easiest way to distinguish them from coalfish which is also a very common fish which shares the same habitat.

LIFESPAN - The maximum lifespan is around 23 years. However, the average lifespan for a pollack is around 10 years. Most pollack that are caught in nets however are even less than this with an average age of 4.5 years!

PREDATORS - The pollack has many predators. These include, seals, sharks, conger - eel, dolphins and whales and this is adulthood. The pollack will face other predators during its younger stages such as a variety of bird predation, fish predation and crab predation. Having said all of this, humans are still by far it's largest predator.

CHECK OUT OUR RECOMMENDED SUBSCRIPTIONS HERE

Jake's Outdoors is a blog for all of your hunting, fishing and general outdoor needs. Jake's Outdoors has created this space to help beginner level enthusiasts find their way into the world of outdoors and will provide advice on how to get started. We'll cover topics like what gear you need, where to go hunting or fishing in your area, how to cook fish/game animals you've caught as well as other general outdoor tips.

Snipe Hunting: Learn about snipes, their different types and habitat!